Andrew Walsh, Academic Librarian at the University of Huddersfield and Training Officer for the CILIP Information Literacy Group, tells us about some exciting developments with his “Escape rooms for learning” idea, which was first unveiled at LILAC 2016‘s Lagadothon event. 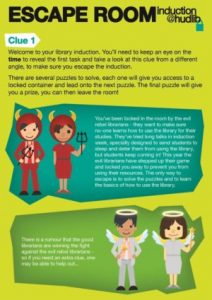 Since winning the Lagadothon with “Escaping the Induction”, I’ve been working on my prototype, which is now finished and being piloted this summer!

My prototype was an induction based on ideas from escape rooms and, I’m glad to say, I managed to turn it into a finished set of materials to pilot. Full descriptions of all the materials, along with other thoughts about using escape room type ideas can be found on the Making Games for Libraries blog. The clues are freely available for anyone to adapt and re-use; no need to ask, just reference the original source, please! 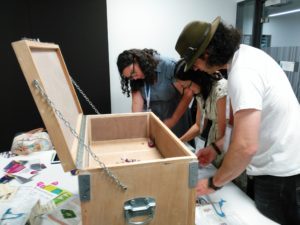 I’ve been able to use the prize to get a rather nice box made to use for testing these ideas out, which is solid enough to last the abuse that students will give it when trying to open the box! The box was inspired by one I saw a Danish group use recently at the Counterplay conference. I’ve also bought a good variety of locks to test use on the box, including some rather fancy “cryptexes”.

After developing the puzzles, ordering some badges as prizes, and having my rough puzzles made to look much more professional by a graphic designer at work, we’ve tried it with a few different groups so far, with more using it between now and Christmas. Everyone who has tried it enjoyed it, though with basic induction materials it is hard to test if it has made a difference to those learners. They’ve also provided good feedback, with the puzzles tweaked to work better between the first rough go and the finished materials now. 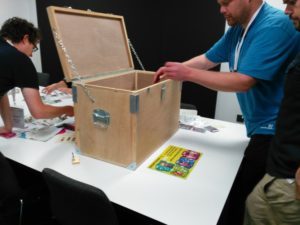 In fact, it’s going so well, that I’m taking it further, launching a Kickstarter to make “mobile” escape rooms available for more people to use. With luck, as well as funding some more materials for people to use, it may even pay for a vehicle to convert so we can run truly mobile educational escape rooms…

I’ve also arranged a 2-day residential event at the gorgeous Gladstone’s Library to allow a group of people to produce more escape room materials for teaching. Bookings are via Eventbrite.