Dr. Tracy Dix of the Leicester Learning Institute introduces her winning entry at LILAC 2017’s popular Lagadothon event. The Harvard Referencing Game was created to help users engage with what is often seen as a very dry subject. Her prototype adapted the 1980s arcade game ‘Frogger’, with each book representing an element in a reference, such as author’s name, year or title, that needs to reach the correct position on the citation “finishing line”. You can view and play the game on the University of Warwick’s Library webpages. 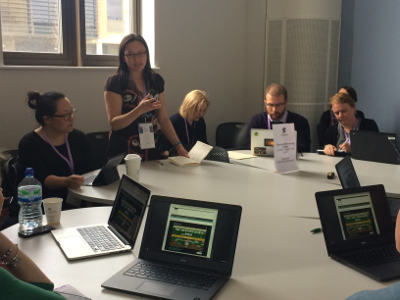 I am delighted and honoured to have won the Lagadothon at this year’s LILAC with a Harvard Referencing Game that I designed for my Postgraduate Award in Technology Enhanced Learning (PGA TEL), supported by the University of Warwick.

For those who weren’t there, the project adapts the traditional citation style guide into a 1980s video game. It certainly isn’t as comprehensive as, say, the style guides produced by the Universities of Leeds and Anglia Ruskin [1]. However, based on conversations with colleagues who teach and my own interactions with students, it is evident that students who are new to research and Higher Education generally view referencing as a bit of a minefield.

Anyway, this game aims to help those who are new to referencing learn how to cite commonly used sources, such as books, journals and websites, in an engaging and dynamic way.

The first prototype is in Warwick Medical School Harvard style as most academic departments have adopted this at Warwick [2]. The game concept is adapted from ‘Frogger’, the classic Konami favourite that I spent hours playing as a child. Citation games have been developed elsewhere before, usually at American college libraries [3]. They mainly consist of simple ordering exercises, as befits the task, and it certainly seemed appropriate to me to stick to a straightforward game concept that would not take too long to develop, nor present significant barriers to user engagement. The ‘Frogger’ concept of guiding a frog safely across a busy road and rushing stream, with various hazards such as traffic and hungry crocodiles, has been adapted to an academic setting that invites users to remove a book from its shelf and transport it across the library to a figurative reference list (with an implied assignment and desk that the student are working on), whilst riding on carts and avoiding busy students en route to this destination.

The characters were reasonably easy to create using Piskelapp, an open source pixel art application, so I did these myself, and I was fortunate that the Library’s IT Manager was able to code the game from scratch using Javascript.

The game has been enthusiastically received both within the University and elsewhere, with academics expressing their keenness to promote it to their students. Unfortunately, due to time constraints, some features have been omitted from the game’s original design that impacts its effectiveness as a learning tool. Thus, although I approached a number of academics and student groups to support the game’s evaluation, I was cautious about publicising it more widely. Feedback both from PhD students at Research Refresh events hosted by the Library at Warwick, and from first-year undergraduates taking an embedded Certificate of Digital Literacy, generally supported the idea that this would be an enjoyable way to learn, but that more reinforcement of learning was needed. This could, for example, be achieved through the provision of worked examples, or if the player’s gaze tracked each publication detail to its position in the line of citation. Fellow LILAC delegates have also acknowledged these issues during Lagadothon. However, I feel that the problems are relatively minor and was thrilled that other library professionals recognised its potential.

Since then, several changes have taken place – most significantly, a career move from the University of Warwick to Leicester, and from libraries to learning development – so progress with this has taken time. However, discussions are underway to see what improvements can be achieved with the Lagadothon funding. It would be ideal if this could be developed into an open source template that would enable any institution or any academic department to enter the referencing styles that they use, and would then generate a bespoke version of the game for them. This is a pretty lofty ambition, however, so it would be good if the existing game could be developed to improve learning outcomes for users at the Universities of Leicester and Warwick. Judging by the crowds of new students who gathered around an electronic game installed by the Sports Centre during the University of Leicester Welcome Week Fair, I think there could be potential for getting students and academic staff engaged with the work of the Library and Learning Development at both universities.

Find out more about the Lagadothon and how to enter in 2018.