Jonas Herriot reports on the One Day School held by the Youth Library Group London in May.

On Tuesday the 21st of May the Youth Library Group (YLG) London held their annual One Day School (ODS) which took place this year in Canada Water Library in London. This event is held most years and is an opportunity for those who may work with the younger section of library users (usually considered to be up to the age of 18) to come along and learn skills and pick up ideas which will help them in their roles. These days usually have a central them and in previous years these have included Poetry and non-verbal mediums (such as audio books, picture books, graphic novels, and games), but this year it was Information Literacy (IL) that provided the central motif around which the day was built. 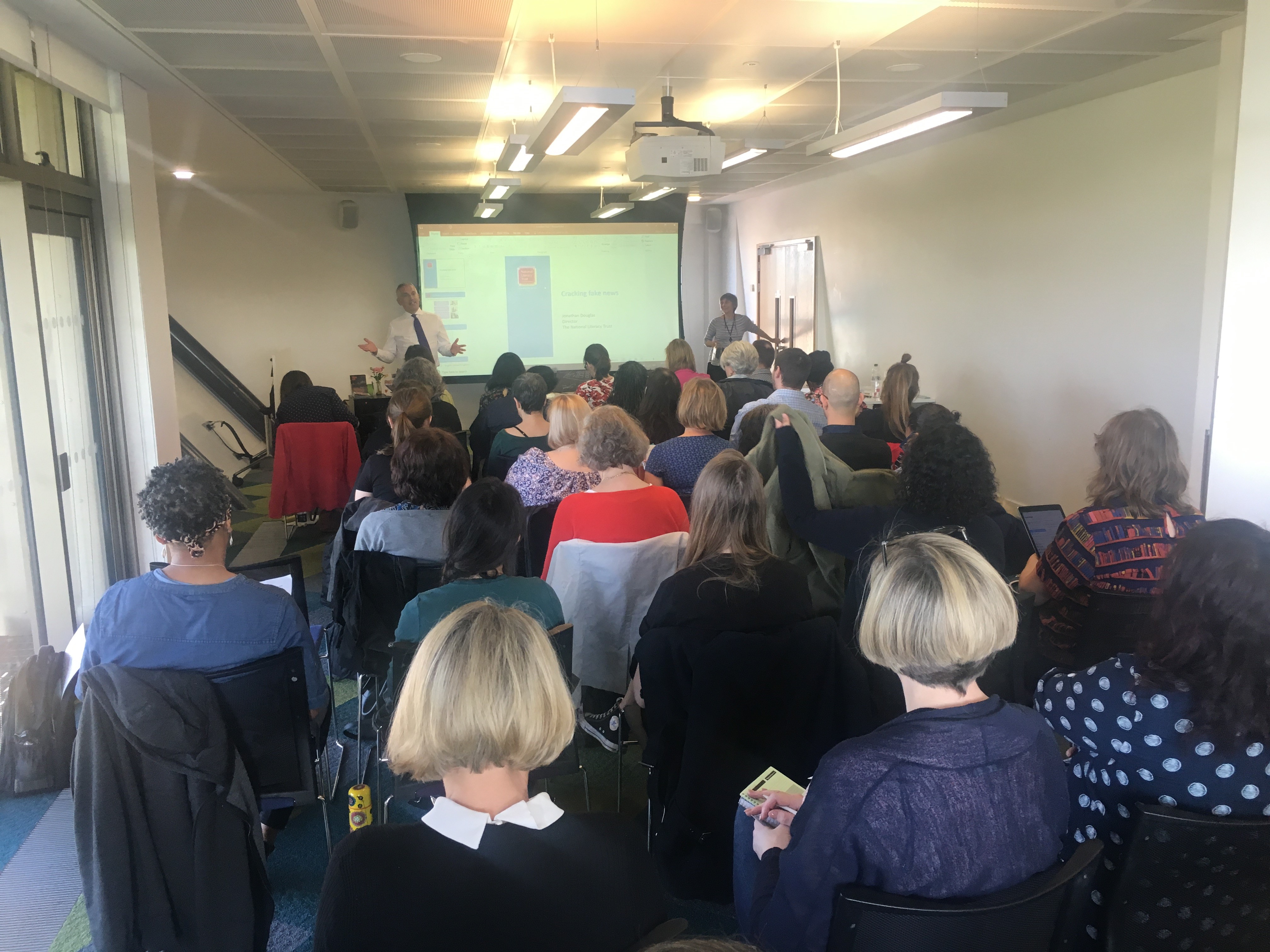 The day started at 9am with several of the YLG committee turning up bright and early to set up and sign up attendees as they arrived. In total 42 attendees signed up to hear over ten speakers across 7 sessions, and alongside this the bookshop Moon Lane Ink were in attendance with a selection of their relevant titles for people to peruse and buy in the afternoon.

The first speaker of the day was Jonathan Douglas from the National Literacy Trust who talked about ”Cracking fake news” and the problems that a lack of literacy creates in society. This talk included maps showing how the level of literacy across the UK correlates with areas with high levels of poverty and how they reinforce each other. Interestingly he talked about how time spent on reading has been dropping over the last ten years and not just in relation to physical texts, but also online ones including social media and how this could be related to the rise of visual mediums. He did highlight though that we need to ensure that we aren’t wedded to the idea of only physical books being important, as reading digitally can be better for some groups and can widen participation, and that all forms of reading help peoples literacy levels improve. He then linked this lowering of literacy levels with the ability for people to spot fake news (only 2% of young people consistently spot fake news, 50% of them worry about this, and 61% trust the news less as a result|), and the fact that people who don’t read are less likely to support a Free Press which is vital to the underpinning of democracy.

This talk was followed by Jane Secker – Chair of the Information Literacy Group (ILG) – and Bev Humphrey – a literacy, school libraries and technology consultant – who took part in a panel talk about Information Literacy. This talk covered areas such as how the attendees could become more digitally literate, keeping track of online resources, how librarians can help with the digital divide, and whether it is our role to teach IL at all. The back and forth nature of this conversation was often added to by questions and comments from the audience, and  showcased the different ways in which school, public and academic librarians approach these issues, and provided ideas from each group for the others to investigate and incorporate in their roles. Take homes include the use of Evernote for note taking, and Wunderlist for task organisation, the Research Smarter guides which were originally developed for use in the TeenTech projects, the Open Learn website and Deakin University for courses on digital literacy. The final part of this talk centred around the pros and cons of social media and whether it impacted on young peoples emotional wellbeing, with various reports both for and against this view being discussed, with the ultimate view that it can be good, but more needs to be done to ensure it is a safe space and that the addictive nature of it is dealt with.

After a well needed coffee break the day resumed with Ross O’Neill talking about Coder Dojo and the work they did with young people. Coder Dojo is an organisation which helps to create local coding groups using volunteers to help teach children how to code, and build links while doing so. Ross talked about the history of this group and how it has expanded to have over 1700 clubs spread out across the world. By providing the support and resources it allows local groups to establish themselves, and then share their own work with the wider community. This talk was followed Richard Addis and Catherine Vale from ‘The Day’, which is an online newspaper designed for schools and groups to use to help young people develop their literacy skills in dissecting news. This was another talk which looked at fake news and the problems it creates in society, and how we need to give people the skills to help them evaluate what they encounter. The Day is a paid for resource which provides new content adapted from the wider media, and then builds questions and discussion points for its readers to utilise.

After lunch and an opportunity for attendees to chat and network the afternoon was kicked off with Sarah Pavey who is an independent consultant and trainer for schools and libraries, and is also a school representative on the ILG committee. In her talk she talked about the differences between game based learning (a game which has defined learning outcomes) and gamification (adding elements from games such as point scoring and awards to motivate people in an activity), the need to develop non-routine cognitive abilities to help people prepare for the future of work, and the range of different resources which she uses in her work. The last of these proved particularly useful; for attendees as she not only gave us a list of what she used, but also what she used them for and the strengths of each of them.

This session was followed by an opportunity for attendees to discuss what resources they use and to share them with others, as well as to grab a last cup of tea/coffee and to look at the range of titles that Moon Lane Ink had bought along. This was followed by the last session of the day which was Usborne in-house authors Alex Frith and Alice James. Here they talked about the challenges they face in their writing as they are given subjects to turn into books on a  range of subjects, most of which they know nothing about. They charted the steps that this would take from the initial research, through getting in touch with experts for advice and feedback, up to dealing with illustrators to design the finished product and to convert some of the information into pictorial forms.

The feedback on the day was incredible positive and showed that many of those working with younger people are involved in teaching IL and that the ways in which they approach this is incredibly varied, but that contact and guidance form the ILG groups was very helpful and could be built upon further. The speakers covered a range of topics, all of which were relevant to the attendees, with some more applicable to public or school librarians, but that the ability to pass techniques and ideas between these two groups benefits both.