Laura Woods is Subject Librarian for Computing & Engineering at the University of Huddersfield, West Yorkshire, UK. The below is a case study Laura had intended to present at the LILAC conference this year, before it was unfortunately cancelled due to the coronavirus pandemic..

In the autumn term of 2019, I decided to take a new approach to some lectures I present every year to final year undergraduates on Computing and Engineering courses at the University of Huddersfield.

I see all final year undergraduates for one lecture per each of the three main subject areas within the School: Computer Science, Engineering, and Music Technology. These lectures occur in the Autumn term when they have just been given the brief for their final year projects (equivalent to a dissertation). These lectures are massive, usually up to 200 students per lecture. For most students, this will have been the first time I’ve seen them since their first year.

The students in these lectures vary widely in their experience of literature searching and library research. Each have chosen very different topics for their final year projects, with a range of requirements of the level of research required. Some will complete mainly practical projects which only require a basic “background research” section in their write-up, while others may have chosen more theoretical projects which will require a substantial literature review.

I struggle to know what to cover in these lectures. It’s my only contact with the final years, so I usually try to cover at least a bit of everything and signpost them to further resources/help where needed, but this gets mixed feedback. Some find some bits useful but not others, some find it all too basic, some all too complicated. I also usually have behavioural issues to deal with: 150+ bored and/or confused students in a lecture hall can lead to chaos!

The idea and how it worked
While planning this year’s lectures, I had a flash of inspiration. Instead of trying to cover everything quickly (boring), or trying to do a couple of things in greater depth (more interesting, but hard to know what is of most interest to the group), my lecture would be: a Choose Your Own Adventure!

I planned about 15 minutes of content each on a series of 5 topics: advanced searching, specialist resources, planning a lit review, evaluating your sources, and referencing (see lesson plan and slides for the topics covered and a brief outline of each activity). I gave the students a brief explanation of the five topics, told them we would cover two of them (but that I would provide resources on the rest) and let them vote on which to cover, using Mentimeter.

I ran the vote at the start of the session, and then went through the topic voted in first place. I then ran the vote a second time, removing the option that we’d already covered. I decided to do it this way (rather than just picking the first and second place results from one vote) for a couple of reasons. First, that there tend to be lots of latecomers to these lectures, so I didn’t want those who arrived during or after the first vote to miss having a say. Second, I wondered if people might change their minds on what second topic would be most useful, after going through the first (which may have happened, as I will discuss below).

The reaction
I ran this for the first time with my Computing group: historically the most challenging in terms of behaviour. I’ve never seen them so engaged! Usually there’s quite a bit of talking and general inattention from these students, and when I introduce activities they either ignore them or use the time to chat instead. This time, the lecture theatre was so quiet that you could have heard a pin drop. And when I introduced the activities, they actually did them – and contributed to a lively discussion after each one!

The subsequent sessions (with the Engineering and Music Technology groups) were just as successful, so it wasn’t a one off! I have a couple of theories on why it had such a dramatic effect, particularly on the behavioural issues. My first is that they appreciated the respect I showed them by enabling them to have a say in what they were going to learn. This seems borne out by the feedback comments I got at the end.

My other theory is that possibly they were caught off-guard by being invited to plan their own lecture. This was unexpected for them! It took them out of their comfort zone (where they would usually just tune out) as they didn’t know what else to expect.

The topics
One of the most surprising aspects (for me, at least!) was what topics were most popular. All three groups picked “how to do a literature review” as their first topic: this one was unsurprising, as most students in this School have never written a formal literature review before they get to their final year, so they’re often daunted by the prospect.

The one that surprised me was that all three groups (sort of, see below…) picked “Evaluating sources” as their second topic. This is a topic I have always wanted to explore in more depth with my final year students, but I tend to only mention it, in favour of spending more time on covering the basics of literature searching, specialist resources, and referencing. 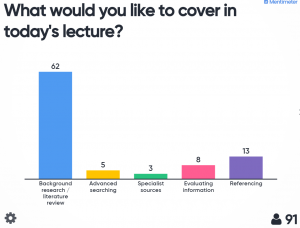 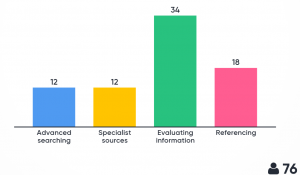 It was also interesting that this topic was never the second choice in the first poll, but leapt up in preference after I covered the literature searching topic. I can see two possible reasons for this: it could be that everyone who voted for literature reviews in the first poll then voted for evaluating information in the second, adding their numbers to this option. Or, it could be that after the section on literature reviewing, the students realised that evaluating their sources was very important (in the lit review portion I talk about why you need to use your critical judgment and include quality sources in your research), so changed their minds from a previous option.

The only class where things didn’t go quite to plan was with the Music Technology group: when I ran the second poll, it was a tie between two options (“evaluating information” and “advanced searching”). After a moment of consternation, I announced that we’d have a “second referendum”, quickly edited the poll to only show the two options that were tied, and ran it again. And… it was a dead tie again. So I deadpanned that democracy clearly doesn’t work, and decided to do a very cut-down version of both topics. Which worked, just about: I had to go through them really quickly, and ditch most of the activities I’d planned, but I managed to get through it and the feedback was still positive.

The good
As mentioned, this was more successful than I’d even dared hope! I had no behavioural problems from any of the three groups, even minor ones – a first for me! The feedback was overwhelmingly positive from the students, including many who specifically mentioned the “choose your own” format of the lecture. See a sample of comments below (I particularly enjoy the one who has awarded me an honorary doctorate!). 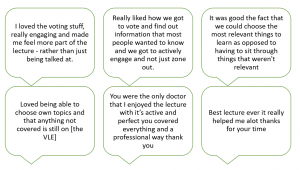 There was also an unexpected side effect: an increase in the number of one-to-one appointments students requested from me after the classes. In previous years, students from these courses have tended not to use the library’s enquiry services or one-to-one support. In 2018/19, I only saw 3 final year students for one to ones. In the 2019 autumn term, I saw 11 final year students for one-to-ones, and more came to the help desk or emailed the library mailbox with queries.

I think this may have been because the nature of these sessions meant I couldn’t cover everything, so in between each topic I really emphasised that if they needed help with any other aspects of their research, they could see me for an appointment. I always include something at the start and end of my lectures about appointments and other help available, but take up has always been low, so I think referring to this throughout the lecture really helped.

The bad
The main downside to this session was that it was INCREDIBLY tough to keep to time. Trying to fit two hands-on activities, plus time for the votes, meant that there was very little wiggle room if anything went wrong. This was particularly apparent during the session with the tied vote: running the vote again ate up a lot of extra time, as did trying to cram two topics into the remaining time!

I was lucky that there weren’t any technical issues to contend with, as that would have thrown everything off. I did have a contingency plan for if there were internet/wifi problems: I was going to do a “show of hands” vote instead of the Mentimeter, and had some back-up slides to use in place of some of the activities that required internet access.

There were two minor complaints in the feedback about not covering the topics they wanted (see below). However most students seemed to appreciate being offered the choice, and that by design this meant their preferred topic wouldn’t necessarily be covered. I did emphasise throughout that all five topics were covered on the slides, which they could go through on their own time, and that I was happy to see any students for separate appointments if they needed further help. This seemed to satisfy most students.

The other point that is worth considering is that this session relies heavily on digital tools. For students on Computing and Engineering courses, I don’t think this is such an issue: I’ve never encountered a class where not everyone had a smartphone, laptop or tablet with them. I’ve always given my students the option of pairing up with the person next to them, but no one has ever taken this option. For different subject areas and/or different demographics, you would need to consider the digital divide, and how to include students who didn’t have (or want to use) digital devices.

The future
I am going to continue to use this approach with my final years and would like to consider how I could use it with other groups as well. However, I don’t want to over-use this technique, as there’s a risk it could become a gimmick. I think part of the reason it was so successful is because it was unexpected!

There are a few things I will revise for next year, such as allowing more time for disruptions, and planning more back-up content in case of technical issues. I will also need to consider how this could work for an online lecture, as it seems likely that this is how our teaching will be delivered in term 1 at least, due to the pandemic! I feel like this could be adapted fairly easily for online delivery, but I haven’t yet started to explore how this could be done.

4 thoughts on “Guest Post: Choose your own lecture: an interactive approach to student engagement”