I’m the Secretary of the ILG. 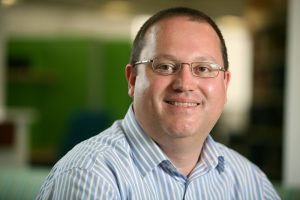 I was elected as Secretary in summer 2013. I’ve been interested in Information Literacy since starting my second professional post as a subject librarian (I was “weekend librarian” previously) and suddenly found the teaching of information skills a central part of my role. I’ve mainly been interested in the practical “teaching of” these skills, but increasingly have become fascinated by the theory as well. I saw becoming involved with the Group as an opportunity to work more closely with some of the amazing people involved in IL in this country and further afield.

What do you do in your committee role?

I deal with the paperwork! Agendas, minutes and all that jazz… As one of the core officers, we also act as a conduit between CILIP HQ and our committee members, expected to feed information both ways. I attend conferences regularly, so try to represent the group and build awareness of IL and the Group wherever I can.

I’m an Academic Librarian and Teaching Fellow at the University of Huddersfield. Along with 3 subject librarians who report to me, we support two of the University’s Schools: Music, Humanities and Media; and Education & Professional Development. I’m particularly interested in improving the teaching of information skills and helping staff and students to improve their information literacy.

I’m easily distracted and do all sorts of things outside my “day job”! On the library side, I’ve written and edited several books and articles. I’ve recently set up a publisher to produce affordable professional development books for LIS staff. I’ve made library games and run workshops on making games for libraries, which has been great fun! Alongside Gary Green I’m about to launch a set of library advocacy materials (including sending materials to politicians and the press), the “Library A to Z”, after running a Kickstarter campaign to fund it. Outside the library world, I’ve two children and a puppy and try to drag all three of them to do as much outdoor activity as possible. At this time of year, I make a lot of jam, chutney and fruit flavoured alcohol, largely from “wild” fruit I liberate from the local area. I’m also far too geeky and I’m currently playing with Google Glass!