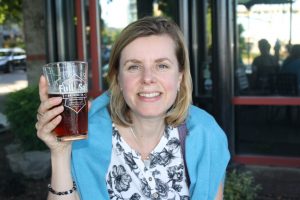 I headed off for a few weeks to visit the Canadian Rockies in search of bears (four spotted), elk (20 plus spotted), lakes and mountains (too many to count but Lake Louise and Lake Maligne up in Jasper were highlights). It was also a good chance to spend time thinking and reflecting on what I had learnt at the conference I attended from 23-25th July in Portland, Oregon, Library Instruction West. I’m grateful to the CILIP Information Literacy CO-PILOT committee and LSE for supporting me to attend a great conference.

Working in the newly renamed team, Learning Technology and Innovation, I was on the look out for new ideas and innovations. We have this sense in the UK that exciting things are happening in North American universities that we need to be aware of in the UK. I certainly came back with a sense that things are different, I’m just still trying to pin down exactly how! So here’s my attempt and in my first blog post written during the conference I was struck by the differences in terminology we use. I think in terms of people’s job titles it is worth thinking about this a bit more. I met instruction and outreach or information literacy librarians (not subject librarians or academic support) I also met instructional designers (what LSE would call educational developers) and I heard talk of educational technologists but from what I heard many did not seem to be working alongside the library folk as often as in case in the UK. Those differences suggest academic support services are set up slightly differently in US and Canadian universities. However, people did talk about the same issues such as how to engage faculty, how to embed digital and information literacy effectively into the curriculum, how to be innovative in their teaching and use technology appropriately.

Secondly (and I knew this already but hadn’t realised how widespread it was) many librarians I met were part of the academic departments or faculties. Many have the status of Associate / Assistant Professor presumably putting them on the same footing as academic staff. This suggested much more of a partnership when it came to teaching than the model we have in the UK. It also mean that undertaking research, going to conferences, publishing, editing journals and even taking sabbaticals were part of their day job. Maybe this is something specific to those librarians attending LIWest, as after all was is a conference aimed at teaching librarians? But if we believe that learning in Higher Education is more than just what happens in formal teaching sessions then I think that those of us in what we might term ‘learning support’ roles should really be more widely recognised and not cast merely as ‘support services’. The academic curriculum is also only one part of the learning that happens in Higher Education and arguably much of that content is available either in our libraries in the form of books or online via published scholarly sources, open educational resources and other less formal sources. Students learn often despite the formal teaching they receive. So it’s not really surprising that given the sheer volume of online information many in HE are  questioning the role of lectures and possibly the notion of a ‘lecturer’ as a job title. At LSE we are moving to call our lecturers Professors and Assistant Professors, and I wonder if the next logical step is to look at the staffing structures for those of us that work in academic support.

North America seem to be better at collecting evidence about the value of information literacy and the keynote from Alison Head focusing on Project Information Literacy‘s work with recent graduates and employers, provides another valuable piece in the jigsaw – what happens when graduate enter the work place? Are they equipped with the abilities and literacies they need? Alison was using data from the Learning Curve report about recent graduates and employers. Recent graduates were asked about the information literacy skills they thought they developed while at university that they used in their employment. Meanwhile employers were asked about what new recruits actually need when they start work and whether graduates have those abilities. The mismatch between those two studies was fascinating, and their  findings suggest today’s graduates who could demonstrate how quickly they could find answers online and more experienced employers who wanted these graduate to use both online and traditional research methods.

Another observation from the conference was following my workshop on sharing IL resources as open educational resources. Delegates told me the larger US Library Instruction conference, LOEX actually stands for Library Orientation Exchange and in the pre-internet days the members met to exchange their teaching ideas and resources. However, sharing your resources within a closed community is one thing, we were discussing sharing your resources internationally, potentially with people you’ll never meet. How practical is this? What copyright issues are there when we try to use open licenses to share our content? We discussed the problems of differences in copyright laws in different countries and again language differences came up, which made it harder to find relevant content. However the work of the CoPILOT committee was praised by the delegates I met at LIWest and I didn’t get a sense that many librarians were releasing their teaching materials as OERs. I also hope I highlighted some useful IL resources we have in the UK which do have open licences on them.

Finally I was really struck by the many parallels between the work that William Badke and Robert Farrell described in their talk about situated information literacy in the disciplines and the work Emma Coonan and I have been doing with ANCIL. It was great to meet Bill after reading his thought provoking article in Communications in Information Literacy from 2010 about why information literacy is invisible. I think their ideas deserve a longer blog post but what is clear is that information literacy is situated in a discipline and generic IL sessions will only get librarians so far. I was fascinated to hear about the work that Robert has been doing with the Sociology department to understand how they use information in this discipline, using focus groups. Some of the work had parallels with the ANCIL audit that we conducted at LSE back in 2012. But we both felt there could be a really interesting research project around working with one specific discipline across different institutions to study situation information literacy.