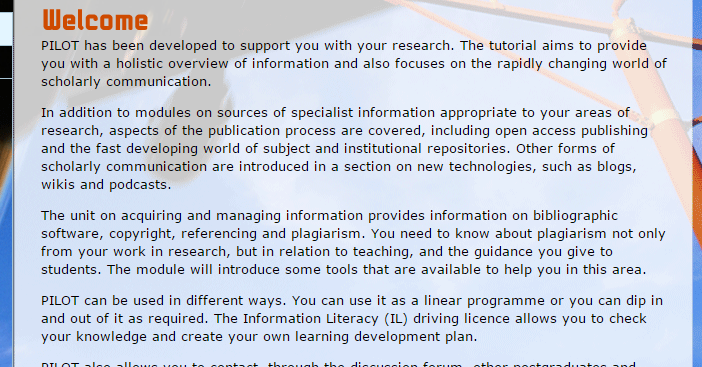 PILOT is an online information literacy and research skills training package aimed at postgraduates, PhD students, postdoctoral and staff researchers. PILOT is about to be upgraded to a mobile friendly version which will form part of our main library website and share the university branding.

PILOT was built using Dreamweaver and can be modified and updated using any web editor. The new version of PILOT has been built using a mobile friendly design on T4 (Terminal 4), GCU’s content management system.

Most of PILOT is licensed CC-BY-NC (creative commons Attribution, Non-Commercial), however some sections do vary. This is because additional material has been added over the various versions in response to user demand. These sections have carried forward the licensing of the original material.

The original version of PILOT was developed by Imperial College, London. It uses audio, video and web pages. We have tailored it using a combination of our own materials and OERs. It has been demonstrated to lecturers and staff of our graduate school who made suggestions for additional material. We have also made changes in response to advances in technology and the use of social media in academia. Lecturers also wanted more information on referencing (we added several new styles as no one system is in use across GCU) and communication and writing skills. This content was adapted from OERs from a wide variety of sources!

The original files were delivered on a data stick, and edited using Dreamweaver by one staff member who developed the resources alongside her other work on the library web site and other projects. No external funding was made available. Internal funding was limited to a one day Dreamweaver training session and the provision of non-GCU standard Dreamweaver software. The rest of the university was using the Terminal 4 content management system and standard templates. The new mobile friendly version of PILOT has been developed using mobile compatible templates on the T4 system and using the main GCU branding. The flexibility of T4 has allowed us to retain the look and feel of the original with improved navigability and functionality.

After PILOT had been in use for two academic years, the need for a mobile friendly version became apparent. Google analytics showed that a rising number of our users were using mobile devices and fewer were using static networked PCs. User feedback also revealed that the menu system needed to be reworked to improve clarity and navigability. This involved rewriting content and restructuring menus.

It is hard to quantify the time taken as it was undertaken simultaneously with other projects.

PILOT was originally made available on Blackboard as the chief librarian at the time thought that better user statistics would be available. This proved not to be the case. There was also the issue that distance learners found BlackBoard hard to use due to the university requirement to change password every three months. As PILOTwas developed and shared as an OER, there was no need to protect it behind a login system and so it was decided to make it available to a wider audience on the open library web site. This meant that more reliable and easier to obtain user statistics would be available via Google analytics.

Feedback was obtained using Google forms embedded at the end of each section of PILOT. The feedback was collated into spreadsheets and many of the suggestions have been incorporated into the new version.

The original version of PILOT was designed as a sequential course, with the option of using individual units on a standalone basis. Users at GCU did not use it in this fashion, preferring to go directly to the short sections they needed at the time they were required. To cater for this, and to address the problems with the structure and navigation, lecturers were provided with a set of direct links to the most popular sections which were embedded into blackboard modules by the librarian. This helped lecturers provide blended learning resources in their modules and allowed them to direct students to the appropriate sections as pre-work and backup to library training and relevant modules.

PILOT statistics on Jorum only run from 2013, so do not capture activity which took place before then, the first edition was made available in 2011.

Some users found that the provision of zip files made the OERs difficult to open and manipulate. Other found it hard to download from Jorum and were provided with sets of files on a data stick. Non-UK users were also provided with files on data stick or using dropbox.

Read all about it!: