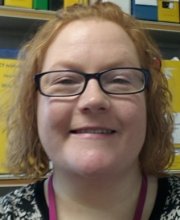 I’m Jacqueline Geekie and I have been the Public Libraries Representative on the CILIP Information Literacy Group since December 2014 when the opportunity arose approximately the same time as I won the Public Libraries bursary to attend LILAC.  I work in Aberdeenshire Libraries as the Information Literacy and Learning Librarian and have been in this post since April 2012.  I work in rural Aberdeenshire where we have 36 libraries, all of which are located between mountain and sea.  As I work in a rural authority, at times I am rarely in the office as I travel around Aberdeenshire providing Information literacy sessions in schools or events in libraries.  It is safe to say life is never dull.

Being on the committee also means you get lots of new experiences, all of which have been great for successfully completing my chartership revalidation.  These various activities make my working life enjoyable and satisfying, for instance, I get to attend the LILAC Conference; judge Teentech projects; been involved in the Information Literacy Definition revision and help to promote it.

Speaking of which, we had planned to officially launch the new definition of Information Literacy at LILAC in April 2018, however I was asked to attend a SLIC/SCURL event to speak about it a couple of weeks before the official launch.  This was a little nerve wracking as this was the first time we were revealing it to a wide audience.  With lots of encouragement from colleagues and surviving a cancelled train, the revealing of the definition was welcomed and there appeared to be more Twitter activity for that than anything else in the day.  Oh, the relief!  I was able to enjoy the rest of the event and listen to the varied contributions with a relaxed mind.

In Scotland, we have a Network of Digital Champions whose role is promote all things digital.  We have received funding from the Scottish Government to train staff in providing Code Clubs within libraries and providing each authority with a 3D printer.  To facilitate the introduction and development of technology within libraries there is Training in New Technologies available for library staff to help them increase their skills in helping others.  The group of 32 digital champions, one for each local authority, meet 4 times a year to discuss different aspects of digital literacy with the idea of embedding best practice in all local authorities  and supporting the National Strategy for Public Libraries 2015 – 2020.

SLIC (Scottish Library and Information Council)/GLAM (Galleries, Libraries, Archives and Museums) have employed a Wikimedian in Residence since August 2017.  The aim of the project is to establish public libraries as creators of digital content.  They organised a 1lib1ref in Scotland event which had 6 editors creating 39 edits on 10 articles.  They are also training and supporting public library staff to become Wikipedia editors in several local authorities as a pilot project. We heard from one project to create digital content on three subjects: an ironworks, a priory and an Antonine wall from their local area.

ILG are funding research in Stirling Libraries on Public library digital participation programmes– the impact on employability.  As Welfare Reforms have been introduced libraries have seen the number of people using libraries for job seeking purposes increase.  Stirling and Clackmannanshire have provided Digital support help job seekers with their digital and information literacy capabilities and they are researching the impact these have on job seekers.  This will be an interesting piece of research that will inform local authorities of the vital work that public libraries do to support all in the community, especially the disadvantaged.

These are just a handful of the projects that are being delivered by resourceful public librarians.  They are always willing to work in partnership with others so if you have an idea of a project that we can help with please get in touch with your local library.