Back in the mists of time when I was a child, my three older sisters went to America to visit an elderly Great Aunt and Uncle. My mum didn’t think it was fair to ask my sisters to look after the 11-year-old me, so I had to stay at home. While they were there, the local library had a Scottish event, and my sisters did some Highland dancing and sang songs for the locals. This was the first time that I had heard a library could do “other things” as I only visited my local library to borrow books. Now, having worked in libraries some years, I am involved in a range of events and activities that have become commonplace in libraries. I am fortunate to have the right mix of digital and analogue in my job, and get the opportunity to provide different experiences for our library users.

In the last few months, public libraries across the country have been working with the BBC to provide Virtual Reality sessions in libraries, with BBC content. I first became aware of this opportunity at a Digital Champions meeting for Scottish Librarians, and most of us applied to be part of the pilot. Live Life Aberdeenshire was one of the local authorities picked for the experience. The tour was organised by a VR Producer in the BBC who planned when the headsets would arrive in each location, how long they would stay, and how many headsets would be sent. They suggested a ratio of 1 member of staff to two headsets, but we managed with 1 member of staff to 3 headsets and even 4 headsets when required.

When it was our turn to host, we received between 4 and 6 headsets from one local authority, and then passed them on to the next location. We had to pay for the return postage, which was about £50 for 3 headsets in original boxes, or 4 headsets without original boxes. This was a relatively inexpensive way for us to try out the interest in this type of technology. There were 5 films in total, from documentary films on the Congo, to a cartoon animation of Dr Who and more realistic animation, to a real sound recording of a Berlin Blitz raid in 1943. We were allocated three sets of dates when we would be able to show each film or films.

The headsets were Oculus Go, which had the content downloaded onto it through the BBC App. I believe this content is freely available now, although at the time I had to sign a licence to show the films. The BBC have been creating Virtual Reality content for a year or so, and were keen to see if this was an experience that the public wanted them to provide. Unfortunately, the survey took almost as long as watching the film, but the majority of people took the time to provide feedback.  With over 150 libraries taking part across the UK, they have received very valuable feedback from a cross section of the community.

We took this experience to libraries, schools, a prison, and council offices, and the numbers taking part were: Dr Who: 150; Berlin Blitz: 250, and finally all 5 films together: 115. There were die hard Dr Who fans who loved the experience, which was voiced by the 13th Doctor: Jodie Whitaker, and we had all ages taking part from 13-80+ years. The Berlin Blitz recording was taken into schools, and teachers and pupils were transfixed by the experience. Teenage girls became totally immersed in a matter of seconds, and teenage boys were sobered by the ages of those taking part. Finally, taking all the content to Council Offices and the prison was an opportunity to promote what we do in libraries, as well as allow participants to have a go. Staff were conscious of being watched by colleagues so found it more unsettling, and it was sometimes a hard sell to get them to try it out.  The prisoners on the other hand were more than happy to put the headsets on and be taken out of their current circumstances.

We also asked for some verbal feedback, and created word clouds from the responses. This is the feedback from the Dr Who and Berlin Blitz experience: 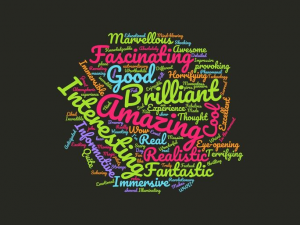 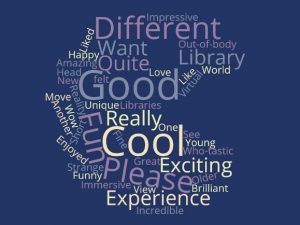 The people who came in to view the films were amazed at how immersive an experience it was for them, and that they were able to access this in their local library. This made me think about different applications for my job, and information literacy especially. Wouldn’t it be great if we could immerse those we work with in an information literacy experience – what would that look like? For pupils and students, it could be looking at how to create a citation; how to verify sources of information; or how to get help finding the right information. For the public it could be about online safety; searching for holiday reviews; or reliable health information.

The technology is relatively inexpensive for the Oculus Go headsets, which cost between £200 and £250, although I’m not entirely sure of the cost of creating content and this may prove to be prohibitively expensive. Is this technology being used in universities now, and is there a project that universities and public libraries could work on together to give access to special collections that are rare and fragile? It is possible for two people in different locations to watch the same film at the same time, and even play games together, so why not collaborate on a project? This technology is becoming more established in the mainstream and, as it becomes more affordable and more applications are developed, the possibilities are almost endless. Now I need to go back to the real world… 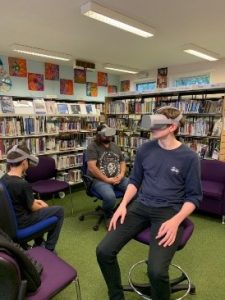 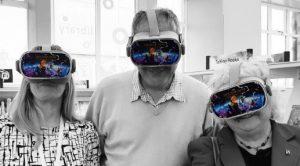