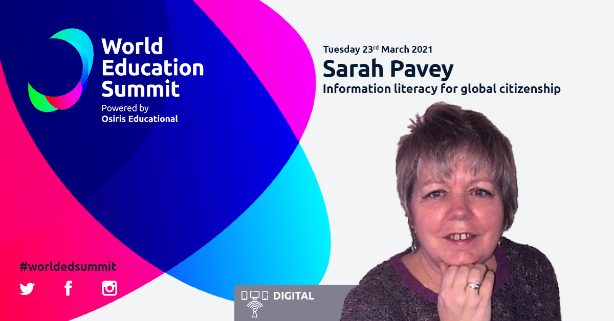 Four Days at the World Education Summit…AND I SURVIVED!

Sarah Pavey is an independent Consultant & Trainer and EPALE Ambassador, and is Schools Representative for the Information Literacy group.

My paper titled “information literacy for global citizenship” was to my delight accepted for the World Education Summit conference last year and was initially billed as a workshop. However, due to the pandemic, the event was moved online and consequently over 50,000 educationalists from around the world were able to enrol and take part. A slightly larger audience than I had anticipated! 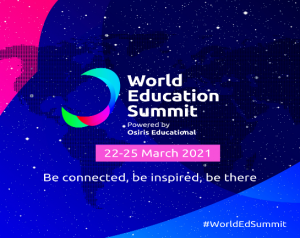 The Summit (organised by Osiris Educational) ran over four days and brought together some of the top education gurus from around the world including John Hattie, Carol Ann Tomlinson, Dylan Wiliam, Alison Peacock, Andy Hargreaves, Alan Daly, Mick Waters, Tim Brighouse and Anthony Seldon. Other speakers included celebrity Ruby Wax and current president of the School Library Association, Richard Gerver. In all there were over 100 speakers, but I was one of the few to be given the opportunity to present live and for a full 45minute session.

There were eight dynamic stages, and the content was broadcast over four different time zones. The idea was to highlight areas of learning that are of most current global significance and which have the most impact on education. The themes included Impact, Values, Digital, Culture, Cognition, Curriculum & Assessment, Inclusion & Support, Inspection & Turnaround, Implementation & Evaluation, and Talent Development. As well as keynotes, workshops, and case studies, there were live debates and “Ask Me Anything” sessions where I experienced the pleasure of having my questions answered by the stars! The living books sessions enabled authors of the moment to share the most practical tips and tricks from their books. Two of the most memorable were Debra Kidd and Hywel Roberts’ “Uncharted Territories” using a picture book theme to explore questioning and understanding and Joanna Grace’s collaboration with her young son Heath “My Mummy is Autistic”. It was so fascinating to hear her experiences of teaching and the adaptations she had to make. Other talks fell into “The Moment When…” and here speakers shared their stories of gratitude about those who have influenced their lives and careers for the better. It was so pleasing to hear Andy Hargreaves explain how he was “rescued” by his public library! All sessions have been recorded and will be available to replay for up to a year after the Summit.

With so many speakers it would be impossible to give credit to everyone in this blog, so I reflected upon how I could summarise the experience. Many of the themes were addressing the concerns we have about lack of information literacy both in the curriculum and in everyday life. However, this was not the terminology they were using. They talked about critical thinking and wider application of knowledge, although Dylan Wiliam criticised the ambiguous use of vocabulary within the curriculum more generally. He pointed out that the greatest achievement of the 20th Century was moving from a world population that was 14% literate to one that only had 14% of people unable to read and write. He suggested this was the impact of teachers and I suggested it might be something to do with librarians too!

Janet Clinton from Melbourne University in conversation with John Hattie debated the future of education. Janet advocated that greater emphasis needed to be placed on the evaluation of information by students in schools and how they selected what to use. I was surprised at this statement given that in Australia there are highly qualified school librarians and information literacy is embedded within the curriculum. I also rather felt we as information professionals should be moving beyond evaluation and look to teaching the importance of information architecture and the purpose of creation as exemplified in Barbara Fister’s work. It is difficult to know how to get our voices heard when it comes to developing education policy.

Another defined theme within the conference was dealing with the aftermath of the pandemic and the legacy it has left. Many educationalists explored the practicalities of catch-up learning while others pondered on the idea of a more permanent blended learning approach. Alan Daly talked about the power of social media and its importance over the last year, delving into how we could capitalise on learning from each other. In a highly provocative, edgy and sometimes uncomfortable session, Roger Schank proposed that “global education sucks!” and proceeded to tell everyone why. Although unconventional, his arguments were underpinned by solid evidence and gave food for thought. He blamed the Romans for our current education crisis placing too much emphasis on skills and tests of oracy about philosophy in the forum for “rich kids”. He claimed education and where your degree was obtained are just exemplars of social class bragging. You could feel the shockwaves resounding over the MS Teams connection by this point! Then he said we needed to focus on individual education, on what we felt passion about, or what was needed by our global and local community rather than cramming students’ heads with unnecessary junk facts.

Others explored the need for space to allow for mental recovery and well-being. Anthony Seldon showed the importance of silence for reflection and relaxation although slightly unconventionally explaining its use in education through fruit and vegetable analogies. In particular, the use of brussels sprouts to demonstrate the hot air created by fad research and trends was amusing. Andy Hargreaves expounded the importance of being kind to ourselves and realising that we could not achieve everything immediately. He also suggested that it was women leading the way in the recovery and that this was helping to bridge the gap. Andy enlightened me that the term “hybrid” comes from ancient Norse and describes the blend of a wild boar with an old milk sow. He said within hybrid learning we need to recognise the impact of male and female approaches to issues but was keen to emphasise he was not suggesting for one minute that the predominantly female teaching workforce was made up of old sows!

So where did my contribution fit in to this star-studded education fest? My talk centred on the CILIP Information Literacy definition of 2018. I outlined a lesson I have conducted several times now for both staff and students, that looks at Everyday Life, Education, Health, The Workplace and Citizenship and contemplates the consequence for society if we lacked information literacy in any of these areas. The class is divided into five groups and each is given one of the five strands to debate. I showed slides of the prompt cards that I use for beginning discussions and underpinned what I was saying using quotations from research, such as the effect that plagiarism can have on the economy of countries. (Králíková, V. et al, 2019). The groups then feed back from their specialised focus and are reconvened into groups with at least one person from each strand present. The new groups are then given some of the sixteen UN Sustainable Goals and asked to think how information literacy will impact on how these are achieved for global citizenship.

I received several questions at the end of my talk, mostly asking how I envisaged these concepts being embedded into the differing school curricula around the world. I explained the work surrounding our Information Literacy for Education group regarding this matter and highlighted a link to the document “Information literacy for education: A call for expression of interest” in the slides. I also referred to the International Baccalaureate which includes a Theory of Knowledge element and this won swift support from Stephen Cox (CEO and founder of Osiris Educational) who was chairing my session. Given the video of the live session will be available for a year hopefully more delegates will get a chance to watch and engage.

So, an exhausting but immensely interesting and satisfying few days and I am hoping maybe my forthcoming publication from Facet, “Playing Games in the School Library” might earn me a Living Books slot next year.