In this case study, Jennie Blake tells us about My Learning Essentials, the University of Manchester Library’s award-winning academic skills programme, including a suite of interactive online resources covering a wide range of information literacy and academic skills area. 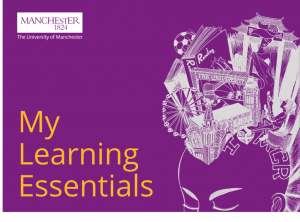 The primary tool used is Articulate Storyline. This was chosen as the development tool as the e-learning technologist had particular expertise in its use and because it’s a flexible enough tool to be extremely powerful in the right hands, with a user-interface that is easy enough to use for a non-expert. This has proved useful, as we’ve had other members of the team help with the development of some resources, particularly in creating screen-capture demonstrations.

Unlike some other flash-based development tools, Articulate Storyline also has HTML5 and iPad publish options to ensure cross-compatibility with multiple devices, a key element of the Library and University of Manchester’s online development.

Those wishing to reuse these resources can either link to the existing versions from the My Learning Essentials webpages or download/edit the source files from Jorum. Note that you’ll need access to Articulate Storyline 2 to be able to edit the files.

The initial suite of resources, launched in September 2013, was created from scratch by a team of six people: four librarians, a learning developer and an e-learning technologist. The e-learning technologist managed the initial development, as well as acting as instructional designer and builder of the resources. The librarians and the learning developer were the subject matter experts for the resources.

The development process for each individual resource is based on an ADDIE (Analysis, Design, Development, Implementation, and Evaluation) model for instructional design. We start by establishing the learning objectives for each learning resource, much of which is based on student demand as identified in the face-to-face workshops delivered as part of the programme. We then go through an explicit development process, beginning with a discussion about potential ways of approaching the learning experience based on the previously defined learning objectives. Next, we produce skeleton outlines of the content and structure, and finally write detailed storyboards before launching into the actual build stage.

The subject matter experts provide the raw material for the resources; the learning technologists work closely with them to translate their content and ideas into effective, engaging online resources that meet the learning objectives, as well as bringing their own expertise in design to the process. As we move forward with the programme, the team of subject matter experts is ever-expanding, and we’re now working with colleagues from other services across campus, such as careers and counselling, and academics across campus.

The initial development took six months from inception to launch. This included the development of a suite of 12 resources. Ongoing development of individual new resources varies in timescale, depending upon the size and complexity of the resource and topic. Some have been created within a month from start to finish; others take much longer.

Feedback on the resources has been extremely positive. The vast majority of our users report that they found the resources useful or very useful, and almost all have said that they are at the correct level to meet their needs. In the 2014/15 academic year they’ve had over 65,000 hits.

Reception of the resources beyond the University of Manchester has also been fantastic. We’ve been asked to speak at a number of conferences about My Learning Essentials and are running some workshops for other institutions on blended learning programme design. The programme won a Blackboard Catalyst Award for Innovative Blended Learning in 2014

Data from Jorum tells us that they have had almost 2000 downloads. We’ve yet to see any adapted versions, though we are aware of a number of FE colleges that are in the process of adapting our resources for use with their own students, and a number of other colleagues from other institutions have been in touch about reusing them.

As well as being available for download and repurposing, the My Learning Essentials resources hosted on our own site are free to be linked to as they are, and user stats show that our resources are being linked to from all over the world.