A report by the Chair of the CILIP Information Literacy Group, Jane Secker, on the Austrian National Libraries Conference (Österreichischen Bibliothekartag), held in Vienna on September 15-18, 2015. 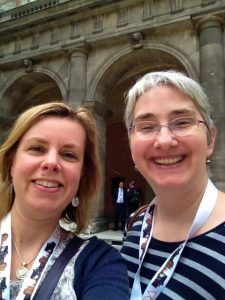 The conference was held at the University of Vienna, which is celebrating its 650th birthday, and attended by over 900 librarians. The theme of the conference roughly translated into ‘future libraries’ and explored all the big issues affecting libraries in Austria, including, among others, open access, digitization, copyright and information literacy. The opening keynote was given by Robert Darnton, University Librarian of Harvard, who focused on libraries and openness in the broadest sense of the word.  Robert talked about the ‘dark history’ of libraries when their policies were less open, and how academic libraries can be elitist organisations. He highlighted the development of the Digital Public Library of America, which I have to confess had until then passed me by, but seems to be a fantastic ground-up approach to building a digital library collection of America’s cultural heritage. There was also an opening address at the conference from the President of IFLA, Donna Schneeder, who highlighted the challenges of libraries in the digital age.

Almost all the conference was in German, so I was limited in what I could attend without a translator. However, Karin Lach from the University of Vienna, who had invited me to the conference, acted as my guide and interpreter. I attended several parallel sessions focusing on information literacy, including Ulrike Kugler from Vienna University of Economics and Business, who spoke about the work she and a colleague have done to develop online information literacy materials suitable for delivery on mobiles and tablets. Ulrike is the chair of the Austrian information literacy group and has attended LILAC in the past.

Simone Kibler and Linda Eckardt from the Techische University Braunschweig talked about their ambitious new project to gamify information literacy teaching, through an adventure game ‘Lost in Antarctica’, which is currently under development. Meanwhile, Karin Melloni, from the Padagogische Hochschule Frieburg, talked about using webinars to deliver IL to trainee teachers who are based in schools around Germany.

My own presentation focused on information literacy in the UK and the recent work of our group to reach outside the ‘academy’ and to raise awareness of information literacy in sectors outside the library world. My slides are available on Slideshare and the focus was on the ILG research bursaries that the group launched last year and the three projects funded to date. I also spoke about our work with TeenTech to develop a Research and Information Literacy Award. I highlighted the Student Ambassadors for Digital Literacy programme at LSE, where undergraduate students are acting as peer support for others on their course and have become champions for IL. I finished by briefly discussing why terminology matters in terms of reaching those outside the library world, who recognize the value of IL often by another name and may have preconceived ideas about what librarians actually do!

On the final morning of the conference, I attended a session on information literacy standards and frameworks and their relevance to the German-speaking world. Karin had brought together speakers from Germany, Austria and Switzerland for a lively discussion on the relevance and need for frameworks and standards. It was reminiscent of the session held at LILAC earlier this year that I chaired and, similarly to the LILAC session, the group discussed both ANCIL and the new ACRL framework. Austria don’t have their own IL standards and there was some agreement that, at this stage, it probably wouldn’t be helpful to develop them, as what librarians need are practical examples and case studies of good practice. I was alerted to a fantastic IL resource from Switzerland for information literacy (in four languages including English), and Germany has a similar IL website to our own UK Information Literacy website, which is worth looking at if you can read German.

I also attended a morning session on copyright issues. Austria has recently amended its copyright law to finally allow digital copying, so that libraries can deliver inter-library loans in digital format and readings might be distributed to students. The process cannot start until a licence has been agreed with the rights-holders, similar to the UK’s Copyright Licensing Agency HE Licence. Similar tensions exist in Austria between how to remunerate rights-holders and how to allow for educational exceptions, with the nation looking to the European Union to hopefully bring about more changes to their law.

It was a wonderful week in Vienna and, once again, I was struck how, in the world of information literacy and libraries, there is much that unites us. The same challenges remain, but there is a lot to be gained by sharing expertise and practice across Europe. Vienna is also a beautiful city and I enjoyed my stay immensely, visiting art galleries, the beautiful national library, Freud’s apartment and tasting some of the delightful cakes on offer, including a memorable Sachertorte at the famous Sacher Hotel. I also look forward to catching up with my Austrian and German colleagues next month in Tallinn at the European Conference on Information Literacy.