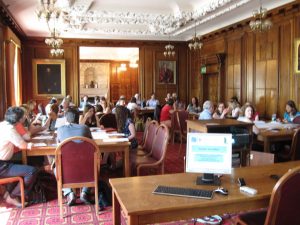 CLIC, Cardiff Libraries in Co-operation, held a summer ‘Teachmeet’ at Cardiff University on 11th July. It was held in the rather grand wood-panelled Glamorgan Building Committee Rooms. There were over 50 attendees from government, school, public libraries and HE and FE libraries which brought together a great mix of experience for discussion and networking. 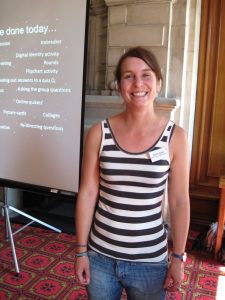 The afternoon began with a workshop by Rosie Jones from the University of Manchester who incorporated a wide range of interactive techniques into her presentation. Rosie was introduced as being a former member of the CILIP IL Group as well as a stalwart LILAC Committee member and also an impressively superfit person which showed in the energy that she brought to her presentation. There were a number of tables around the room each seating around 8 people and Rosie had the groups interacting within minutes of the start of her talk. The first activity in the groups was where each group was given a card with a number of objects on it and the group had to decide how they might use those objects in a student induction. For example one group had a stuffed rabbit toy, cups and envelopes and they had to devise a way to use these items to create an interactive game at induction. One suggestion was to make the rabbit a suit of armour from the cups and envelopes as a team building exercise! Many other surreal and creative solutions were forthcoming from the groups.

Rosie then introduced 5 simple facilitation techniques: ‘Jigsaw’, ‘Redirecting Questions’, ‘Wait time’, ‘Think, Pair, Share’ and ‘Rounds’. All of these Rosie managed to demonstrate to the audience during her presentation. Rosie also introduced the groups to voting with different coloured lolly sticks, a low-tech version of audience participation software.

Rosie summed up her highly interactive presentation with a message to ‘practise what you preach’ i.e. put interactivity into different aspects of your work, e.g. using interactivity in meetings that you chair etc. 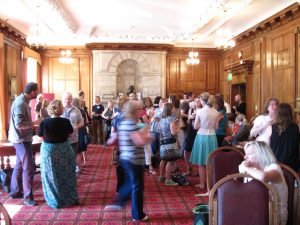 After Rosie’s talk and a break for networking (with Welsh cakes and tea/coffee!), there were 2 Teachmeet rounds. In each round, each participant was able to hear 3 x 10 minute talks which meant by the end of the afternoon, each person had heard 6 talks, each giving unique tips about aspects of Information Literacy training. Those giving the talks had a very strict 10 minutes to get across their message. The variety of talks were excellent ranging from blogging, audience response technology, treasure hunts, ‘buzz groups’, using ‘apps’ for research and study, using post-it notes to facilitate group study, and card games to test students’ knowledge. 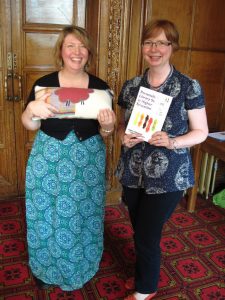 The standard of presentations was excellent. A vote was held at the end of the afternoon for the best presentation and this was won by Charity Dove of Cardiff University whose presentation style won the day with her effervescent and punchy presentation on “passion, possession and performance”. A close second was Sue House from the University of South Wales whose presentation involved using a can of coke to get students talking about search terms and how to combine them.

Finally the afternoon was brought to a close by John Wright’s (University of South Wales) ‘groovy’ musical finale, a satirical song about the Learning Resource Centre (“for people who don’t like the word libraries”!) which John uses in library inductions with his students.

All in all it was an excellent afternoon, which passed incredibly quickly and which undoubtedly will have sparked a whole host of ideas for enlivening Information Literacy training for all of those involved.